Create your virtual production in a pre-built or custom built 3D studio.
Each studio includes;

Place your real world talent into a 'photo real' 3D studio in real time. Unlike simple layer compositing your talent is actually placed within the 3D space. This allows very compact green screens to be used while keeping your talent in the correct location during changes of camera angle for convincing and very dynamic productions. Compliment your production with additional video feeds and images routed live to multiple video screens within the same 3D space.

Select from multiple input options Including

Video can be routed to talent positions (green Screen) , background screens or main bus. Your production can be recorded via screen capture, NDI or SDI* video out. (* SDI available in pro version) 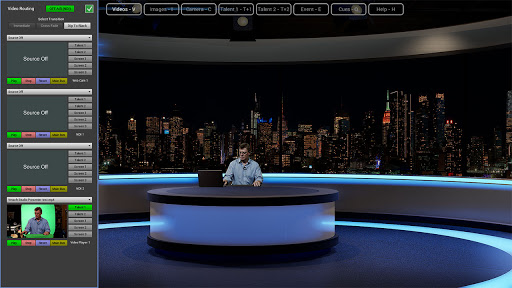 Images and graphics for your productions can be routed to: 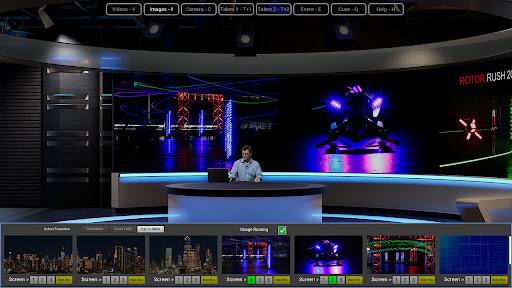 Your virtual camera within the 3D studio can be positioned and adjusted to get the camera angles needed for your production. These can be named and saved for recall during your live production along with transition rate to get the speed of movement that suits your production. You can also use focus and aperture to set your talent against a hard or soft background. Camera controls include: 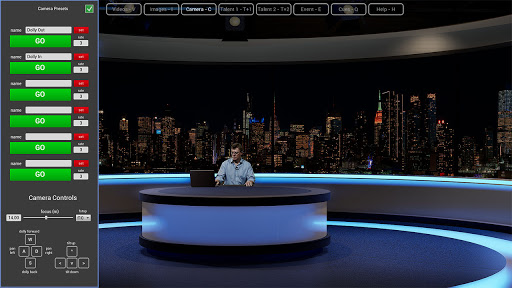 Your talent is placed at pre-defined locations within the 3D space allowing very compact green screens to be used without the need for complex real world camera tracking. The Talent control interface provides fine positioning and cropping to match your video source along with professional quality real time green screen keying. 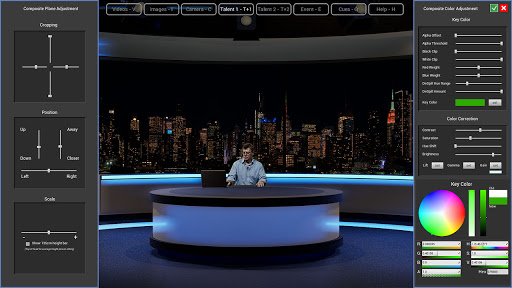 Cues allow you to assign hot keys to media routing, camera angles, transition selection etc. Assign more than one action to a hot key to create a macro. For example you could use a macro to change camera angle, select a new transition type and change the image displayed on the screen in the background. For the best production experience use an external control surface to trigger your cues & macros 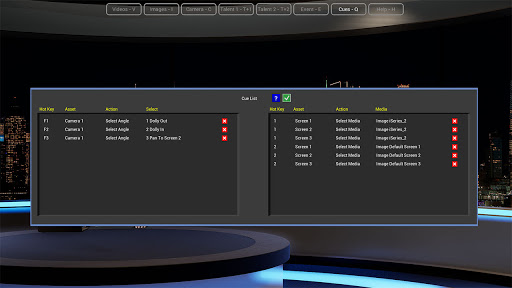 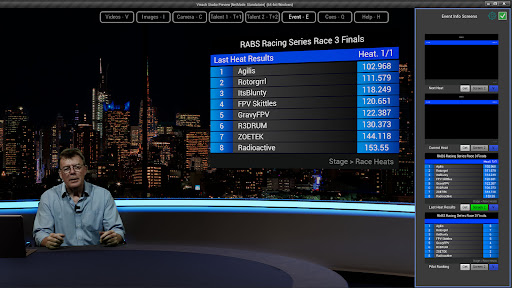 The 'Vmach Studio' software is built on the latest Unreal Engine 3D technology used by Film & TV. The performance of your PC will affect the number of usable video sources and video resolution that can be achieved. The minimum recommended spec is: Windows 10 64bit OS, Intel i5 CPU @ 3.50GHz, NVidia RTX2060 graphics card (or equivalent supporting DirectX 11 or greater), 8GB RAM plus internet connection.

We recommend evaluating performance on your intended system before purchase. Contact raysmith@vmachmedia.com for a trial version to evaluate you system.